Mariners Centre of Excellence is GO! 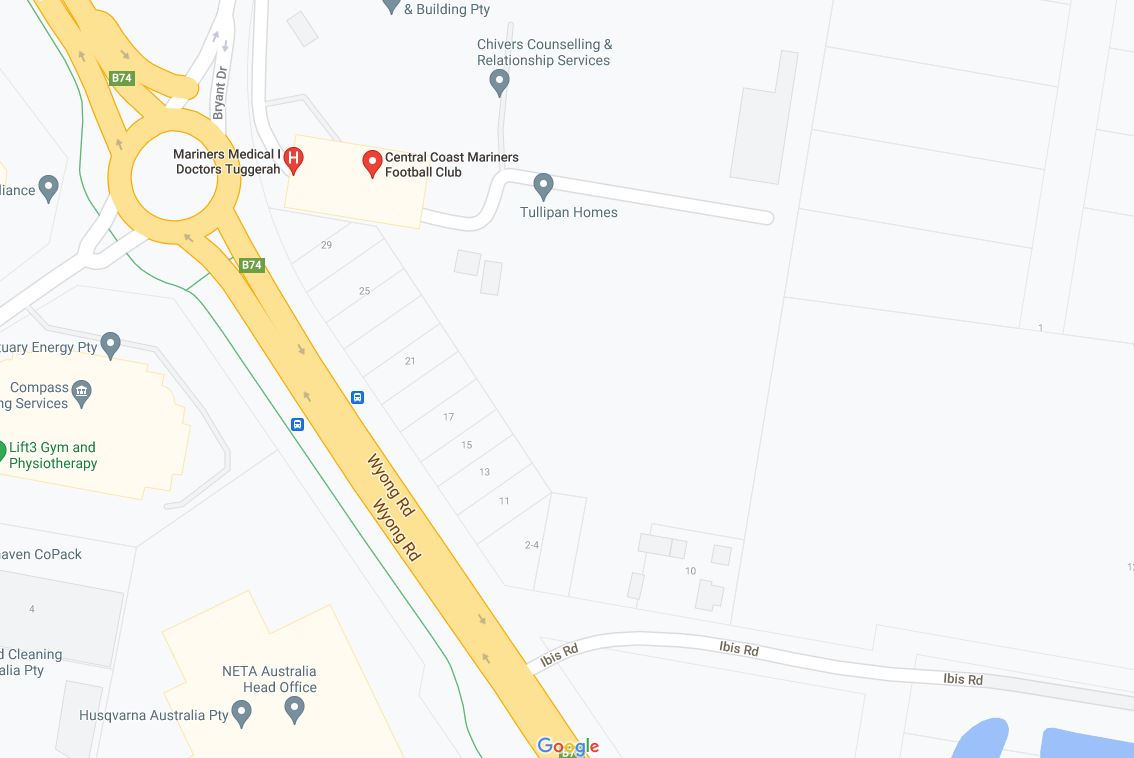 The numbering is a bit strange. I worry which 7?
Click to expand...

Not sure but rings true. Is there enough yet to fit a stadium on

The second entrance will be Ibis Rd (as was originally planned). Council has dicked us around since the main office building was finished.

Looks like offsetting. They'll maintain it as a green space as an offset to the environmental impact of building a hotel. If it's next to the hotel it can be connected as a natural areas for people to enjoy easily enough.

So we're building a hotel then? 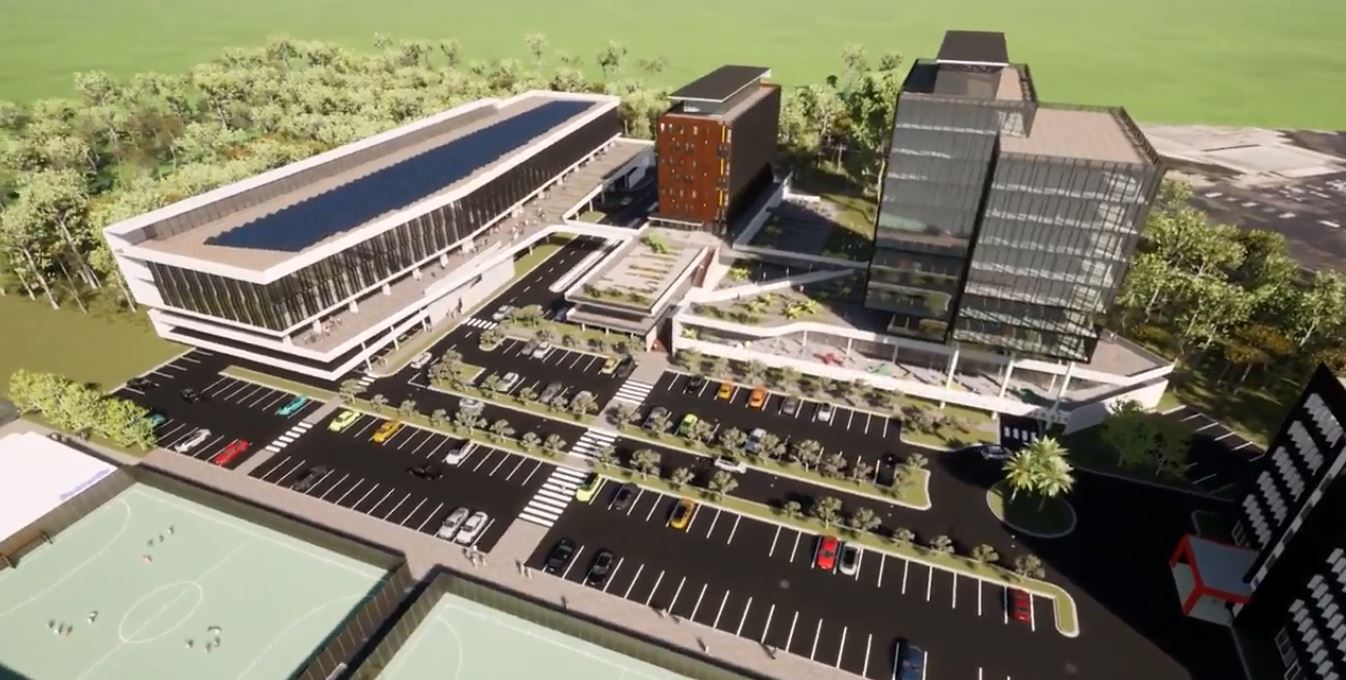 scottmac said:
Why worry? I'd say it's the closest 7.
Click to expand...

I was wondering actually, not worried.
I really shouldn't post after a few, well maybe more than a few beers.

A Place to engage your Community

A Place to engage your Community

I wonder who owns the other blocks along there.
I know the house was sold about 18 months ago (I acre from memory)
It`s a shame we didn`t snap that up too as with the IBis Rd entrance that will boost it`s value...

It’s been three years since the $2.8 billion revamp of Tuggerah was announced. A major step is set to be taken to move plans forward for 5000 new homes and 10,000 jobs.

It’s been more than three years since the eye-popping $2.8 billion plans were announced to transform Tuggerah.

It was the biggest project ever announced for the Central Coast – the Scentre Group’s 35-year vision for 5000 new homes, a new Westfield shopping precinct, 10,000 jobs and more than 70ha of land harnessed.
The plans are set to take a major step coming to the Central Coast Local Planning Panel on Thursday. Concept plans released for the Tuggerah Town Centre in 2019. The land set to be transformed into the Tuggerah Town Centre.
The panel needs to give the go ahead for Central Coast Council to prepare a planning proposal for 60 Wyong Rd known as the “Tuggerah Gateway Site”, located between the existing Westfield Tuggerah and the M1 Motorway.
The proposal will look to rezone part of the land from “transition” to “general residential”, retain environmental conservation land and initiate a maximum floor space ratio along with a maximum height limit for the mixed use land from 16m to 42m.
The council will also prepare a Development Control Plan specifically for the 42 hectare site.
“The planning proposal will seek to create a new community to support the existing Tuggerah Centre with a range of low, medium, and higher-density housing options to meet future housing demand,” the council report states. The current carpark would be turned into residential, retail and commercial blocks, as well as hotels and serviced apartments. Land between the M1 and Westfield, a former abattoir currently used for grazing, will be included in the transformation.
“The residential development will be supported by the retention of the B4 Mixed Use zoned land to provide for additional large format retail in the short term, transforming to a mixed-use development with a range of employment, retail and entertainment land uses in the longer term.”
It was February 28, 2019, when former NSW Planning Minister Anthony Roberts made the multi-billion dollar announcement to turn Tuggerah Town Centre into a “ultra-modern lifestyle hub”.
“Let me tell you I never forgot the north,” he said.
“Opportunities like this proposal have the potential to realise the profound life-changing prospects for people of this community today and for generations to come.” When former NSW Planning Minister Anthony Roberts announced the plans, he assured locals that the northern end of the coast had not been forgotten.
Concept plans revealed 5000 new homes and units, medium to high rise residential blocks, a seniors living facility, an outdoor adventure park, as well as an education precinct with a new primary school.
The current carpark at the front of Westfield would eventually be turned into residential, retail and commercial blocks, as well as hotels and serviced apartments. 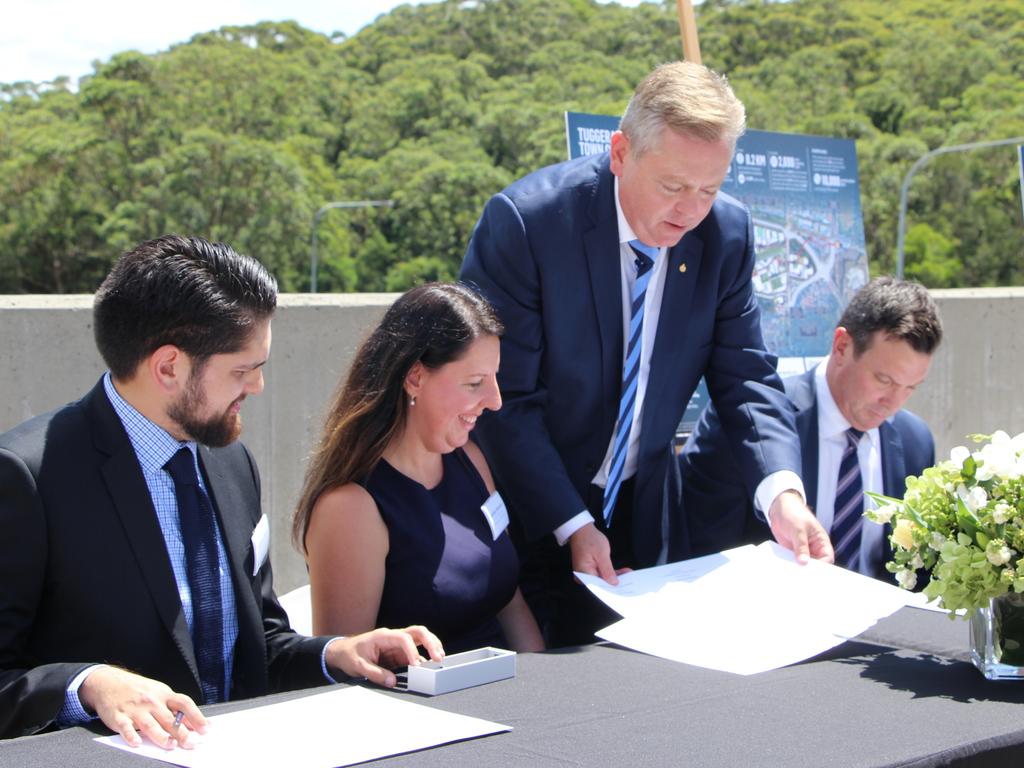 In 2019, a NSW Planning Minister Anthony Roberts, Scentre Group director of development Stewart White and Darkinjung Local Aboriginal Land Council Chairperson Matthew West
In 2021, the Scentre Group told the Express there were no updates to share on the redevelopment with plans progressing in the background.
Once completed, the council’s planning proposal for the 42 hectare site will be sent to NSW Planning Minister John Roberts for “gateway determination”.
The council report states that pre-gateway consultation had been held between the Department of Planning and Environment and its biodiversity conservation division, Transport for NSW, NSW Rural Fire Service, Ausgrid and Darkinjung Local Aboriginal Land Council with no objections raised.
“The development of the site will assist Tuggerah to evolve as a more integrated centre, contributing to its desired future character as a sustainable and vibrant centre, and bringing increased activity, vibrancy and viability to the centre,” the report states.
The land between Westfield Tuggerah and the M1 was bought by the Scentre Group, formerly Westfield, in 1990.
The Central Coast Local Planning Panel meet at 2pm on Thursday however the Tuggerah proposal has been listed as an item to be debated “outside” the public meeting.

Ha, I just saw the start saying 'Central Coast Mariners FC reveal its 2021-2025 vision for a 4 star hotel at the site of its Centre for Excellence in Tuggerah' and posted before reading it through. You're right.

Suck shit Pikey - no hotel for you

This "council" will approve anything to get money in the door, they don't give a f about planning regs. If you want to build anything now's the time, I've heard they've been told to approve everything.

Dobbie said:
This "council" will approve anything to get money in the door, they don't give a f about planning regs. If you want to build anything now's the time, I've heard they've been told to approve everything.
Click to expand...

Except anything in Terrigal obviously

Has construction started on the new hotel yet...

midfielder said:
Has construction started on the new hotel yet...
Click to expand...